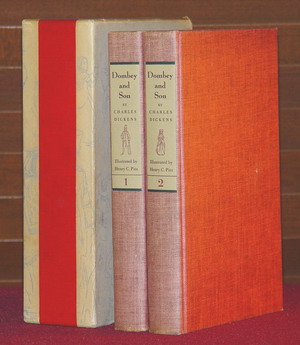 Dombey and Son is one of the great classics of Charles Dickens and it is my personal favorite. It appeared after Martin Chuzzlewit and was an effort by Dickens to regain popularity he had lost with the publication of his previous novel. The novel is also a landmark in Dickens' work in that he placed the story at a higher social level than his previous novels. The story involves the downfall of a dignified and pompous merchant and his learning of the power of love as opposed to the lesser power of money. This is a beautiful set from the Limited Editions Club. Both volumes are in very good condi...
View More...