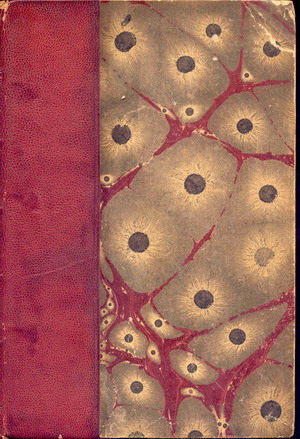 This Classic novel was written by Edmond Rostand, the author of 'Cyrano De Bergerac'. The text is in French. The book is bound in quarter-leather. The volume shows some wear to the boards. The front board has a scratch on the upper right extremity and a small chip to the upper left where the board meets the spine. The small chip does not show on the spine. The spine is splendid with ornate gilt decoration, raised bands and gilt lettering. It is virtually without flaw. The rear board shows some wear to the upper left corner but it is quite small. There are also two very small chips to the upper left corner. The book's textblock is somewhat toned with age mostly around the perimeters of the pages. The endpapers are beautifully marbled and the binding is tight and strong. This is a dramatic play and it is in the original French. I believe this copy to be a later printing of the first edition which also appeared in 1900. Even if you don't read French, this is a fine volume and an important one. It will look great among any collection of antiquarian books. Edmond Rostand's sympathetic treatment of sensitive people is as evident in his portrait of Napoleon's idealistic but hesitant son as it is in that ugly but unselfish Cyrano De Bergerac. L'Aiglon is a verse drama in six acts, much of which must be cut, because of time limitations, when the play is presented on the modern stage. It is an impressive play. In L'Aiglon the character presents will always be known as the weak son of a dominant father. The book shows some wear but it is a wonderful and important drama and I have not personally seen a better copy. I rated it Very Good considering its age and its relatively small flaws. We are pleased to send pictures on request.