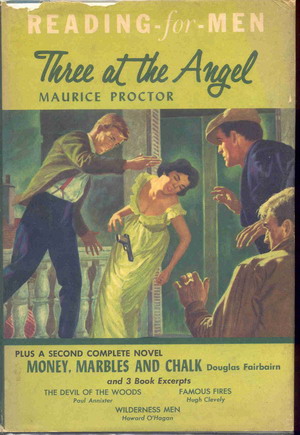 Reading for Men: Three at the Angel, Money ,Marbles and Chalk

I was attracted to this book in a small bookshop when I saw that the cover read 'Reading for Men'.That category is an anachronism in itself! I could not resist as I love very unusual books and I also saw the very strange front cover picture. Published in 1959 when political correctness was not an issue much spoken of, this volume contains two complete novels and three book excerpts. The novels are 'Three at the Angel' by Maurice Proctor, and 'Money, Marbles, and Chalk' by Douglass Fairbairn. 'Three at the Angel' is about a fighter that is barred from the ring and lacking business talents. He teams up with two other ex-boxers in a spectacular jewel robbery during which a murder was committed. They are plunged into the London underworld with their loot which includes a huge diamond called the 'African Star'. It sounds like it might be fun. The second novel, 'Money, Marbles and Chalk' concerns an owner and skipper of a charter boat that is not doing very well businesswise. He takes on a group of charter passengers that are rather odd: there is Washbish and his strange retinue of sycophants. He looks like a heavyweight fighter gone to hell. He is with Georgie, a pet drunk and also the alcoholic Dr. Spratt who administered the Nembutal and Benzedrine. There are two airline stewardesses to sit on laps. It began as a profitable trip until things went awry, It becomes one of the most fantastic treasure hunts in the history of the Caribbean. For those looking for something really different to read, I believe that this volume will fill the bill. The book is in very good condition with small bumps to three of the corners, some light toning to the text-block, a couple of chips to the top of the front panel of the dustjacket, and slight shelf-wear to the top and bottom of the spine panel. The binding is tight and text is clean. We are pleased to send pictures on request.

Title: Reading for Men: Three at the Angel, Money ,Marbles and Chalk

Reading for Men: Three at the Angel, Money ,Marbles and Chalk