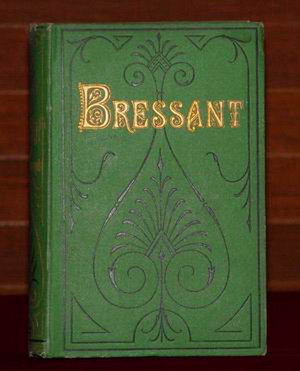 Julian Hawthorne was the son of Nathaniel Hawthorne. He was educated in both the United States and abroad and he spent some of his early life in England. This is a Rare book and beginning with this publication he became a very popular author. This is his First book and this is the First edition of "Bressant". There is an authentic signature attached to the front pastedown that was apparently clipped from the bottom of a letter as it says "Sincerely Yours, Julian Hawthorne". The front and the back boards are in excellent condition and the gilt in the title on the front board is still bright. There is wear to the extreme top and bottom of the spine but very little wear to the spine itself and its lettering. The textblock is quite clean and shows no evidence of foxing. All pages are attached and the original endpapers are present. The rear pastedown is starting at the hinge but the hinge itself is fully attached and you can see a little bit of the webbing of the binding at certain points. There is an almost invisible embossed stamp to the ffep and, with difficulty, the words "Country Gentleman/office/Jun 10 1878/Albany, N.Y./___Tucker & Son". These are all in an oval about 1" tall and 1 1/2" wide. I had to use a magnifying glass to see what the stamp said. It is really almost invisible. The book resides in a Mylar wrapper. Julian Hawthorne said that "I bought twelve reams of large letter-paper, and began my first work,--"Bressant". I finished it in three weeks; but prudent counsellors advised me that it was too immoral to publish, except in French: so I recast it, as the phrase is, and, in its chastened state, sent it through the post to a Boston publisher. It was lost on the way, and has not yet been found. I was rather pleased than otherwise at this catastrophe; for I had in those days a strange delight in rewriting my productions: it was, perhaps, a more sensible practice than to print them. Accordingly, I rewrote and enlarged "Bressant" in Dresden (whither I returned with my family in 1872); but--immorality aside--I think the first version was the best of the three... The book was received in a kindly manner by the press; but both in this country and in England some surprise and indignation were expressed that the son of his father should presume to be a novelist". This is a Very Rare offering for those who are interested in the Hawthorne family and their impact on the literary world.