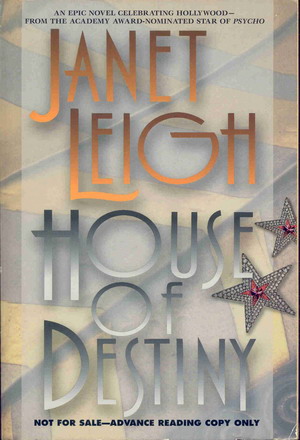 From the star of Alfred Hitchcock's "Psycho" and many other films comes this novel of Hollywood that only an insider could write. This book is in Fine condition and has not been read. There is only the tiniest bit of shelfwear to the extreme top of the book's spine-panel and a very small turn to the bottom right of the front wrap. Both are almost invisible. The volume resides in a mylar cover for protection. It is inscribed by Janet Leigh directly on the title page. It reads 'Peggy' and is then signed by Ms. Leigh. Ms. Leigh, who is also the mother of Jamie Lee Curtis, has written a novel that is both rich in scope and filled with drama. It brings together a cast of characters who reflect our deepest desires as it centers on the lives of two very different men whose unlikely friendship creates an empire.Trade paperback. Signed advance reading copy of the Psycho star's novel. Overall light toning to the text block. Otherwise very near fine. We are happy to send pictures on request.