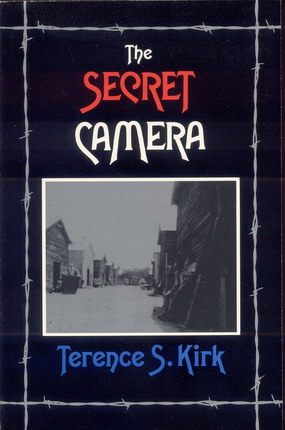 I count myself very luck in having met with this author at a recent bookshow. The Secret Camera is now in its third printing and when I expressed my interest in First editions, the author was kind enough to bring me the last few that he had. This is a remarkable man. His booth was covered with photographs of him with ex-presidents and political figures as well as Oliver North. The Secret Camera is a non-fiction account of Terence S. Kirk's 45 long months in a Japanese prisoner of war camp. He was captured with a group of his fellow soldiers and this is their story. It is a Linited edition of 1000 of which this copy is #838. It is in trade paperback format (the third printing is in a laminated hardcover format) and it is in Fine condition. It is a shocking recount of the incredible cruelty that these prisoners were made to endure. Dragon's Tooth is a First edition, First printing trade paperback as well. It is a fictional story of the same men that were captured with the author. In this book he postulates what might have been had they not been captured. It is also in fine condition and is signed by the author. His wife also wrote a readable version of his signature just above the true signature. These books complement each other perfectly and thus I have decided to offer them as a set. Anyone interested in the treatment of American Prisoners by the Japanese during World War Two will find these books fascinating. A truly unique offering. We are pleased to send pictures on request.