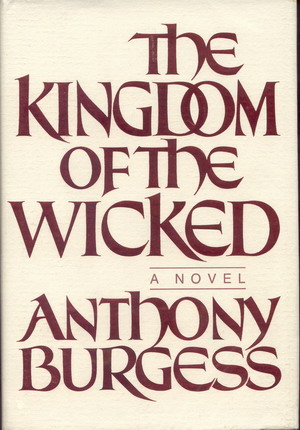 Kingdom and the Wicked, The

This is a beautiful, as new, signed volume by the prolific author Anthony Burgess. Published by Arbor House in 1985, it is the first trade edition after a Limited edition by the Franklin Library which I also carry. A satin ribbon bookmark is bound in. Anthony Burgess is the man who brought us A Clockwork Orange and altered our concept of the English language forever. A letter from the publisher is laid in and the book contains a two page special message for the first edition written by Anthony Burgess. This book is absolutely in pristine and unread condition. The Kingdom of the Wicked is a sweeping novel of the very early days of Christianity. The time is just after the Crucifixion when the Apostles set about spreading the Gospel. Being all too human, they argue over strategy and tactics, over what is permissible according to the mother faith (Judaism) and what is not. All the while they face opposition from the rabbinical court in Jerusalem, a succession of mad emperors in Rome and firmly entrenched pagan beliefs throughout the empire. It is a very handsome volume and would make a wonderful addition to any collection of fine books. We are pleased to send pictures on request.

Title: Kingdom and the Wicked, The

Kingdom and the Wicked, The