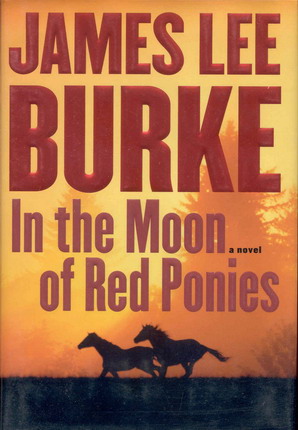 In the Moon of Red Ponies

This book is brand new and is in Very Fine condition. All corners are square and the textblock and binding are perfect. The dustjacket is also Very Fine and it is not price-clipped. James Lee Burke's novels featuring Billy Bob Holland contain wonderful writing as well as action and suspense. In his last novel featuring this character, Bitterroot, the former Texas Ranger left his home state to help a friend that was threatened by the most dangerous sociopath that Billy Bob had ever faced. After succeeding in that case Billy moved his family to west Montana to start his law practice. But in The Moon of the Red Ponies, he discovers that jail cells have revolving doors and that the government he had sworn to serve may have become his enemy. James Lee Burke is first a novelist and second a detective writer. The Great writer Elmore Leonard has said that "James Lee Burke tells a story in a style all his own, in language that's alive, electric. He's a master at setting mood, laying in atmosphere, all with quirky dialog that's a delight". Fine words from Master writer. James Lee Burke is a remarkable writer, suspenseful and compelling. We are pleased to send pictures on request.

Title: In the Moon of Red Ponies

In the Moon of Red Ponies