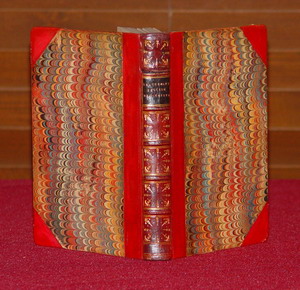 English Humourists of the 18th Century

After the Publication of 'Pendennis' in December of 1850, Thackeray announced (going against the stated opinions of several friends), that he would try his hand at lecturing. Thackeray himself was somewhat embarrassed by this method of making money and would probably have not done so if he had not been concerned with leaving his daughters well-provided (He had just been through a serious illness). Nevertheless, this decision led to a series of brilliant essays on The English Humourists of the Eighteenth century, The writers of this period had always been Thackeray's favorite reading. Thackeray did two lecture tours of the United States using this material. This is the First edition and First issue of this collection of speeches that was published. There had been a previous edition of only a few copies to be used as samples for the publisher's salesmen. It is bound in half leather over marbled boards and It was bound without the half-title and advertisements. The compartmentalized spine has raised bands and very elaborate gilt designs and lettering. It appears that the hinges were strengthened sometime in the past with archival material and it is almost invisible. There is a small armorial plate attached to the inner front pastedown and the name on the plate, 'Enfield', is also written at the extreme top of the title page. The textblock is completely without foxing and the top edge of the book is in gilt that is somewhat dull from age. The book has its own mylar wrapper and is housed in a handmade custom slipcase of full leather and it makes a beautiful presentation. We are pleased to send pictures on request.

English Humourists of the 18th Century