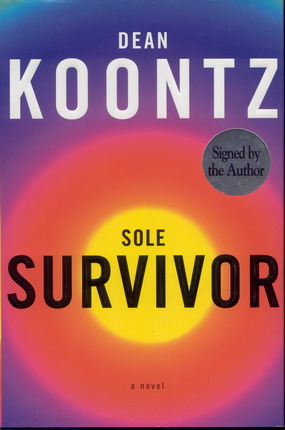 Dean Koontz's novels have been published in thirty-eight languages and have sold over 200 million copies. He is a master of the suspense novel. This story begins with a catastrophic, unexplainable plane crash. Three hundred and thirty dead and no survivors. Among the victims are the wife and two daughters of crime reporter Joe Carpenter. A year later, still gripped by grief, Joe encounters a woman named Rose who claims to have survived the crash and she holds out a tantalizing possibility: A secret that will bring Joe peace of mind. Before he can ask questions, she slips away. Driven now by rage and a hope that is almost as unbearable as his grief, Joe sets out to find the woman. If there really was one survivor, could there have been others? This novel unfolds at a heart-stopping pace as a desperate chase and a shattering emotional odyssey lead Joe to the truth and force him to reassess everything he thought about life and death. This volume is in Fine condition and it is signed directly on the blank page after the FFEP. The dustjacket is also in Fine condition with no rips or tears. The dustjacket is not price-clipped. A terrific story. We are pleased to send pictures on request.