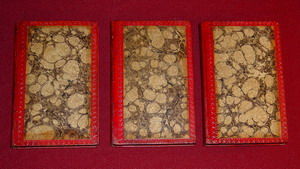 St. Ronan's Well has been called "unique" among the Waverly novels. These beautiful books are bound with a blindstamped leather spine and red leather that encloses the entire perimeter of the front and back boards which are marbled. All edges are also marbled as are the endpapers. This is probably a binding that is near contemporary to the book. It is quite an unusual binding. There is some slight chipping to volume one near the spine on the front board and very slight wear to the other volumes. The half-titles are not present. We find this quite a bit in Scott's novels because many of the binders considered the Half-title to be unnecessary paper so they discarded it onto their scrap pile which they would then sell and generate income. The fly-titles are all present and they basically serve the function of the half-title but they come after the title page, just before the text starts, rather than before it.. There is an armorial bookplate attached to each of the front pastedowns. It is 2 1/2" wide and 3" tall. They really don't detract from a book of this age. As with the half-titles, the advertisements at the end of the third volume were discarded in binding. The textblocks are very clean and have no foxing. The three books reside in a Fine custom made leather presentation case in red to match the bindings of the books. Within the case each volume is protected by a mylar cover. Here is one of the Great classics written by Sir Walter Scott. All points are correct for the First edition according to Todd and Bowden. St. Ronan's Well is a novel of Social Criticism and it is one of Scott's most bitter and scathingly satirical novels. In fact, a scene in which a forced marriage is consumated was so unpleasant that the publishers forced him to alter his plot. As always, Scott tells a magnificent story of early nineteenth century Scotland. We are happy to send pictures on request.