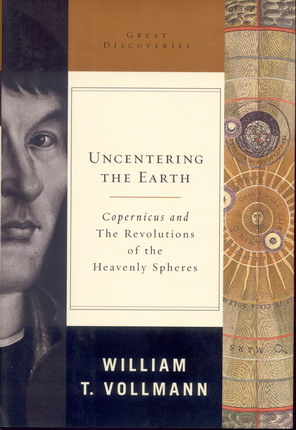 Another different and fascinating book from serious writer William T. Vollmann. Vollmann also penned such works as Argall, The Royal Family, and The Ice Shirt. He is a writer that commands your attention throughout. The book is in as new condition as is the dustjacket. It is signed and dated by Mr. Vollmann directly on the title page. Also present is the errata slip laid-in which will undoubtedly become rare as many readers discard loose sheets within a book. The book has never been read. In 1543 the Polish Astronomer Nicolaus Copernicus lay on his deathbed, reportedly holding his just-published masterpiece 'On the Revolutions of the Heavenly Spheres' in his hand. Copernicus was controversial then as his approach is controversial now. Vollmann takes readers down a subtle path of inquiry making Copernicus and his book all the more revolutionary. Vollmann provides a fresh and enlightening explication not only of Copernicus and his work but of the momentous clash between Copernicus and his world. Please see my other auctions and visit my Ebay Store for many Fine Signed first editions.