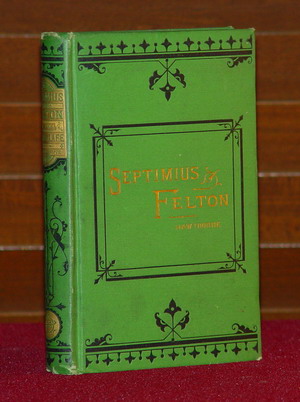 Septemius Felton or the Elixir of Life

Here is an outstanding copy of the First edition and Second printing of 'Septimius Felton, or The Elixir of Life There were only 3000 copies of this title printed on June 24,1872 which included this printing and the first printing. There are no records to show when the type was corrected during the printing, so we presume that the book with the correction is the second printing and was printed on the same day. The only difference between the first printing and the second is that on page 42, line 18 there is the word "it" in the second printing. In the first printing which I also have available, there is only a "t" in the same place. The book is in very near fine condition with a touch of shelfwear to the top and bottom of the spine and the tiniest of wear to the outside corners (it is almost invisible). It is a beautiful binding. Hawthorne had left this book incomplete, in two drafts, at his death. Una, Hawthorne's daughter, and the poet and friend of Hawthorne's, Robert Browning, prepared the first draft for the 1872 publication. The novel is considered to be a "fragmentary" novel and is part of The Elixer of Life manuscripts which were first published in complete form in 1977. In this book Hawthorne explores themes of immortality and it is a wonderful story. It is something of a ghost story that was based on an experience that he had when living at "The Wayside" an incredible house that I have personally visited. The gold lettering on the spine is bright and beautiful. The blindstamp on the boards is fine, as is the gold and shows no evidence of rubbing. The textblock is extremely clean with no foxing. The endpapers are original. This is Clarke A29.2 and the primary Point of Issue for the second printing is that on page 42 line 18 the word "it" is present. This is a really great copy of a work from an American Literary Master. We are pleased to send pictures on request.

Title: Septemius Felton or the Elixir of Life

Septemius Felton or the Elixir of Life